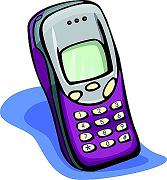 Electromagnetic fields (EMFs) affect cellular metabolism and generate free radicals that can be hazardous to your health. Cell phones are a source of EMFs and there are already thousands of studies pointing out to cell phone hazards. Studies indicate higher rates of Alzheimer’s disease, mood disorders, depression, and other neurological problems in people exposed to EMFs. Other studies show that EMFs may be linked to an increase in cancers, especially brain cancer.

In 2005, the Swedish National Institute for Working Life conducted one of the largest studies on the cancer risks from cell phone use. Their results were published in the International Archives of Occupational and Environmental Health indicating that heavy cell phone users (one hour a day for almost six years) had a 240% increased risk of a malignant tumor on the side of the head the phone is used. In another Swedish study in 2007 published in the journal Occupational Environmental Review, a group of scientists surveyed the result of 11 different studies and it was shown that people who have used their phone for a decade are twice as likely to be diagnosed with a tumor on a nerve connecting the ear to the brain. Prof Kjell Mild of Örebro University, Sweden, who led the research, said that children should not be allowed to use cell phones because their thinner skulls and developing nervous system made them particularly vulnerable. He added that the danger may be even greater than his study suggests because 10 years is the minimum period needed by cancers to develop and there are strong indications that something happens after 10 years. The researchers call for a revision of the emission standard for cell phones and other sources of radiation, which they describe as “inappropriate” and “not safe”.

In 2007, a cell phone company, Orange, decided to remove a mast from a block of flats after seven residents were struck down by cancer with a rate 10 times the national average.

In 2006, Italian researchers found that cell phone emissions excite the part of the brain cortex nearest to the phone in a study published in the Annals of Neurology. In the same line, a study in 2008 led by Rodney Croft of the Brain Science Institute, Swinburne University of Technology in Melbourne, Australia, showed that when a cell phone was transmitting, the power of a characteristic brain-wave pattern called alpha waves in the person’s brain was boosted significantly which was greatest in brain tissue directly beneath to the cell phone. Alpha waves are generally an indicator of reduced mental effort. Another study in 2007 led by James Horne at the Loughborough University Sleep Research Centre in England showed that not only the cell phone signals alter a person’s behavior during the call, but the effects of the disrupted brain-wave patterns continued long after the phone was switched off. According to Scientific American:

Horne and his colleagues controlled a Nokia 6310e cell phone – another popular and basic phone – attached to the head of 10 healthy but sleep-deprived men in their sleep research lab. (Their sleep had been restricted to six hours the previous night.) The researchers then monitored the men’s brainwaves by EEG while the phone was switched on and off by remote computer, and also switched between “standby,” “listen” and “talk” modes of operation for 30 minute intervals on different nights. The experiment revealed that after the phone was switched to “talk” mode a different brain-wave pattern, called delta waves (in the range of one to four Hertz), remained dampened for nearly one hour after the phone was shut off. These brainwaves are the most reliable and sensitive marker of stage two sleep – approximately 50 percent of total sleep consists of this stage – and the subjects remained awake twice as long after the phone transmitting in talk mode was shut off. Although the test subjects had been sleep-deprived the
night before, they could not fall asleep for nearly one hour after the phone had been operating without their knowledge.

A study published in International Archives of Allergy and Immunology (2002; 129:348-50) suggests that cellular phone use for one continuous hour exacerbates allergic responses to dust and pollen in people with eczema. It has been reported recently in Pathophysiology that EMFs can act like an allergen, disturbing immune function by eliciting various allergic and inflammatory responses.

Israeli researchers found a link between mouth cancer and cell phone usage, their results was published in the American Journal of Epidemiology in 2007. They reported that five years of heavy use increased the chances of developing a tumor by 50%.

Another study published in the journal Fertility and Sterility in 2008 suggested that spending hours on a cell phone each day may affect the quality of a man’s sperm. The more hours the men spent on their cell phones each day, the lower their sperm count and the greater their percentage of abnormal sperm.

Researchers believe EMFs have the power to disrupt chemical bonds within cells or damage DNA, but cell phone’s interference with our biology is still not well understood.

We have reviewed only the tip of the ice-berg and it is enough information to take some precautions… Use a hands-free system and limit your cell phone use for a maximum of 2 minutes per month and then don’t forget to turn your cell phone off.