The Werewolf Legend and its Medical Background

There are several skin diseases that are exacerbated and/or precipitated with sunlight – lupus, rosacea, pellagra, and porphyria among others- from which a specific subtype of porphyria is the basis of the Werewolf Legend. I’m talking here about Congenital Erythropoietic Porphyria or Günther’s disease, a very rare (less than 100-200 cases) and severe form of porphyria where there is a lack of a specific enzyme in the bone marrow, urogen III synthase also known as cosynthetase. Children with this condition typically are hairy, they have red urines, and they have extreme sensitivity to sunlight which leaves multiple scars and mutilations. Treatment is based in protection from the sun and splenectomy. Another form of porphyria, Porphyria Cutanea Tarda, is also characterized by sensitivity to the sun with subsequent overgrowth of hair in the face plus other skin erosions like blisters and others.

In addition, there are several genetic disorders called hypertrichosis which cause infants to overgrow hair on their noses, foreheads, cheeks and ears, limbs and torsos. As grown men, they have been the wild men like the man of the woods from the Canaries, Petrus Gonsalvus, who happened to have been born with a mutation which caused a layer of hair to grow over parts of his face and body where in most people it does not. Petrus Gonsalvus married and had children as hairy as he was. His daughter, Tognina, eventually married and bore several children who were as hairy as she. 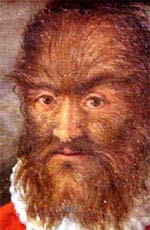 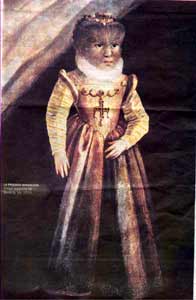