Speaking Out Against Gluten 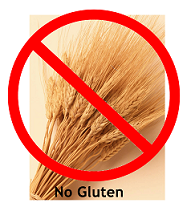 Food sensitivities can manifest not only in a myriad of diseases. Not only that, but chronic illness often involves a state of inappropriate vigilance of our immune/defense system in which food allergy gets involved even if it is not the cause of the problem, leading then to chronic inflammation – which translates into disease.

Most people, including doctors, do not receive any formal nutrition education, so they simply will not believe that something as ordinary as our daily bread will wreak so much havoc on our health.  They won’t believe that a lot of people have difficulty with the digestion and biochemical processing of the gluten found in grains like wheat, barley, and rye.

Approximately one out of a hundred people has gluten intolerance, which can be manifested in about any possible symptom you can think of – and it is estimated that milder forms of gluten sensitivity may affect up to one-third of the American population. The incidence of gluten sensitivity is actually on the rise.

Sensitivity to gluten involves a delayed reaction involving the IgG antibodies of our immune/defense system, meaning that you won’t necessarily get an immediate reaction to gluten. In fact, you can get a reaction to gluten three days after eating it. Or you can eat gluten one day and nothing happens, but when you eat gluten  later on, you will have symptoms. Because wheat and other gluten containing foods may involve a delayed immune/defense reaction, alleviating gluten’s effects on your health may take weeks – or even months – after you stop eating such foods. Eliminating gluten from your diet not only helps to improve mood symptoms, but autistic children and people with schizophrenia will often improve enough on a gluten-free diet to the extent that more practitioners everyday consider it a priority treatment as more research emerges about the dangers of gluten sensitivity. In fact, there is evidence of a causative association between gluten intolerance and migraine headaches, fatigue, depression, any sort of chronic digestive problems (like abdominal pain or discomfort, diarrhea, constipation, irritable bowel, undigested food in stools, gastroesophageal reflux), difficulty gaining or losing weight, osteoporosis, infertility, complications of pregnancy such as miscarriage, diabetes, thyroid problems, schizophrenia, autism, psoriasis and other skin problems, abnormal hair loss, anemia, mouth sores, arthritis, cancers (especially of the small bowel, lymphomas, esophageal),  liver disease of unknown origin, malabsorption of nutrients and nutritional deficiency such as iron, folic acid, calcium, magnesium and fat soluble vitamins, neurological symptoms such as peripheral neuropathy, ataxia, epilepsy, cognitive dysfunction, depression, anxiety, hyperactivity, dementia. Add to that list systemic lupus erythematosis, type 1 diabetes, vascular disease, rheumatoid arthritis and Sjogren’s syndrome and other autoimmune diseases.

But where did this gluten sensitivity come from?

Well, to begin with, the original people from Europe, the Americas, Africa, and the Far East did not adapt to the consumption of gluten because they were hunter-gatherers, or because their agriculture did not include grains like wheat. Their descendants have a high incidence of gluten intolerance. Palaeopathological and comparative studies show that health deteriorated in populations that adopted cereal agriculture. This is in part attributable to the spread of infection in crowded cities, but is largely due to a decline in dietary quality that accompanied intensive cereal farming. Also, the lack of the appropriate enzymes to digest gluten is not only due to heritability, but it is also believed to be due to multiple factors including toxicity (for instance, heavy metal toxicity) which ends up impairing the enzymes’ function.

What happens in our bodies when there is gluten intolerance?

Gluten intolerance has to do with the failure of a particular enzyme which disassembles the gluten protein, a digestive process necessary in order for our bodies to extract the nutrients from the gluten protein. Because of the failure of this enzyme to do its job, a remaining undigested fragment of the gluten protein survives. To our defense/immune system this remaining fragment resembles a virus. Then, thinking that it is a virus, our bodies will trigger an immune/defense response to protect our bodies from the intruder. Since this gluten fragment is so similar to various disease-causing viruses, it will generate a complex reaction that was aimed at the virus, but ends up damaging our own tissues. This is indeed an autoimmune response.  This autoimmune response is suspected to play a role at least in type I diabetes, multiple sclerosis and autism. Complex immune responses damage different tissues in different people, which is why the range of diseases is so diverse.

But this is not the only way gluten can create problems in our bodies. The undigested gluten fragments also look like opium drugs, and this can have a significant influence on our brains and on our behavior.  These opioids have been found in the urine of individuals with autism and schizophrenia, and some people have dramatic withdrawal symptoms when they cut out gluten from their diets.

In short, gluten fragments provoke an autoimmune response which then can create autoimmune diseases, or they mimic opioids which can cause changes in perception, mood, and behavior. Also the high levels of the excitotoxin glutamate in gluten can damage the brain by irritating brain cells. There are other ways in which gluten can cause damage – this is only a shortened version of the whole story! You may want to refer to the suggested reading below, where I will include some of the essential reading on this topic.

I’m afraid I have other bad news.  Everything that I just said about the gluten fragments also applies to casein, one of the main proteins in milk and other dairy products like cheese, ice cream, cream cheese, cream, yogurt, etc.  AND, these dairy products can also cause problems in our bodies in OTHER ways as well. For more information, see my previous post  Why Milk Is So Evil.

The good news is that a solution to all these problems is within your reach, and it is cost effective and worthy of your efforts.  You don’t have to spend lots of money on diagnostic tools as no blood and urine tests are completely decisive.  Diagnostic tests can serve as a guide, but if they’re negative, it doesn’t necessarily mean that you have no problem processing gluten. The only decisive thing will be a response to a change in diet.  You may experience immediate relief after excluding all gluten from your diet, but it is to say that it may take from several weeks up to many months before you experience relief because gluten sensitivity involves a delayed immune reaction. Also, some people are sensitive to a range of foods, and if all of them are not eliminated, symptoms may persist even though the main problematic foods are eliminated. To be on the safe side, take out all gluten-containing grains as well as dairy products. Don’t worry, sardines and other green leafy veggies are better sources of calcium and nutrients than dairy products anyway.

The diet avoids wheat, rye, barley, beer and all products containing even traces of gluten including spelt, triticale, kamut, oats, and millet (some tolerate this last one, others are not so lucky). Hidden sources of gluten include food additives such as modified food starch, preservatives, and stabilizers along with medicines, antacids, vitamins, supplements and beverages.  Processed foods often have hidden gluten in them, and manufacturers are not required to label all possible sources of gluten in their product labels. It is best to avoid processed foods altogether.  At celiac.com you will find a list of items or foods containing gluten.

Eliminating these foods might seem like an impossible task for you, but just keep in mind that we often crave foods to which we are sensitive. Gluten really has drug-like properties which makes us have cravings and addictions to foods that contain it, making us feel as if we have no will power.  Cereals and milk in normal dietary quantities are capable of affecting behavior in many people and a desire for the drug, even cravings or withdrawal, can even be confused with hunger.  Fear not, once you start a gluten free diet to heal your body, the cravings subside! You will be able to live without those foods and you will feel so much better without them. You may find that your disease fades away!  It is important to eliminate all sources of gluten, as minute amounts can set back your progress.

For those of you interested in lab testing as a guide to see if you are gluten sensitive, a urine test for intestinal permeability may be useful. Also blood testing for IgG antibodies to wheat, rye, oats, and barley (this is the IgG ELISA test). Antibodies to tissue transglutaminase, endomysium, reticulin, and gliadin. Also IgA antibodies or small bowel biopsy.

The mind often is the canary in the coal mine when it comes to diseases and inflammation. These series of videos bring the issues of gluten from grains like wheat, casein from milk, and lectins from other foods like corn, soy, nightshade family, etc which can wreak great havoc.

The research that Dr. Peter Osborne has been collecting is truly invaluable. Do visit his website at glutenfreesociety.org and learn all about gluten intolerance. Buckwheat, quinoa, amaranth and wild rice are safe to eat, but other than that, all the rest of the cereals contain gluten. See also What is Gluten Intolerance.

For more information on lectins, gluten, and dairy, see:

Why Milk Is So Evil

Origins of Agriculture – Did Civilization Arise to Deliver a Fix?

Detoxification and Healing: The Key to Optimal Health by Sidney MacDonald Baker, M.D.

For a comprehensive diet dealing with all this issues, see The Elimination Diet