The other day I learned from my god-sister that she was nursing a seemingly dying hedgehog whom was nicknamed Herbie. It just so happened that we had in store the stock bottle of vitamin C for parenteral use, and we decided that there was nothing to lose by applying some C to Herbie. Here’s the written testimonial by my god-sister:

A couple of weeks ago, Scottie found a little hedgehog while outside mowing. It was laying out in the grass during the day and, although still alive, was almost completely unresponsive. The only sign of physical trauma I could detect was a very small wound on his cheek. I had no idea if he was sick, shocked from an attack, coming out of hibernation, or what. We decided to move him to a safe spot in the yard where he wouldn’t be bothered, to see if he would come to himself, and when I picked him up he hardly had the strength to curl into a ball. After the day had passed and he still hadn’t moved, I decided to bring him inside for the night because it was very cold and I didn’t want him to be harassed by predators or waste energy on keeping warm in his condition. I put him in a box with grass clippings, a dish of food, and a dish of water with a little iodine and colloidal silver (the standard procedure for birdies when I don’t know what’s wrong). I also washed his wound with iodine and colloidal silver.

The next morning, he was still alive, but hadn’t eaten anything and had moved little. I tried to give him some of the water mixture with a syringe but he wouldn’t take anything by mouth. At that point, I thought he probably wouldn’t last another night but at least he could die in relative peace. I left him alone with a few last words, thinking that that would be it, but the next day it appeared he had taken some of his water during the night. Feeling a little hopeful, I shared that with Gaby who was visiting, and since we’ve been doing all this research on vitamin C, she wondered if it could help. I didn’t think there was much to lose, so we made a mixture of 1 ml. of stock solution (1/2 gr. vit. C) and 1 ml. of physiological solution, and used an insulin needle to inject it in what our best guess of a muscle was on his lower back. We did this twice in the day for 1 full gram of intramuscular vit. C in a less than 1 kilo hedgehog.

That evening, while leaving him fresh food, I also noticed a giant tick hidden inside his left ear. I removed the gross little thing and Scottie ceremoniously burned it. Pop!

The next morning, I could hardly believe it, he had eaten nearly all of the burger on his plate, and moved around making nests in the box! We decided to give him another day’s dose of vitamin C like the day before (2 doses at 1/2 gram each), but didn’t want to overdo it in case there could be any complications like an abscess or injury from injecting in the wrong spot. The next day again, he had eaten and moved even more!

Over the course of the following week, he just got better and better everyday. He ate mostly raw burger (refused everything else I offered him, including watermelon which they are supposed to love), and drank vitamin C water like a HORSE! We moved him outside, first to the peacock house and then to their small yard so he could have more room to move and find his feet. And, Arkie set up his motion activated night-vision camera in the evening (when hedgehogs are active) to see how he was doing, and caught this: 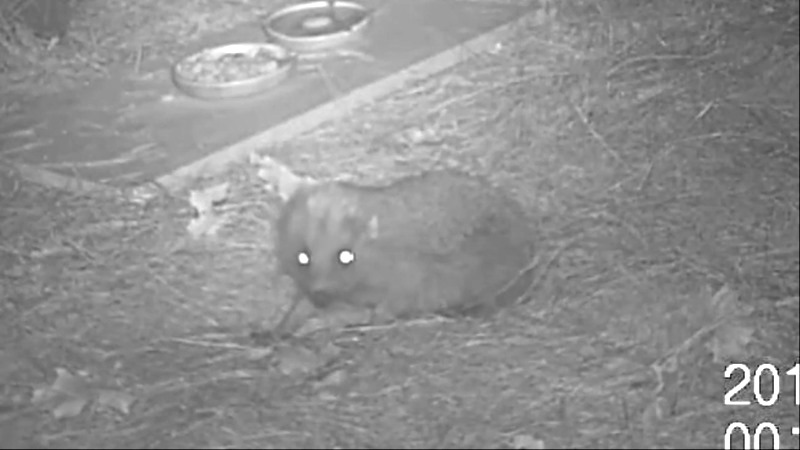 One evening, soon after, when going to check on him before bed, we saw him RUNNING for the first time, at full speed!, to dive under the stack of oak planks where he had been sleeping during the day. I knew he was fully recovered then, and so we took him out to the blackberry bush the next night, near where we had found him, and left him in a big pipe that he liked, wedged underneath the bush (with a little extra food and vit. C water).

We haven’t seen him since, and I hope he’s out feasting on fat snails now, but whatever he’s doing…I’m pretty certain that he was suffering from a tick borne disease and that the vitamin C saved his little life.

Oh, and his name was Herbie:

Did you catch the part that this was probably a tick-borne disease? When my god-sister told me that she saw and removed a tick from Herbie’s ear, I immediately remembered Sidney McDonald Baker in Detoxification and Healing (a must read!) where he relates the story of Sue, a child who had a tick paralysis that was reversed when Dr. Baker found and removed a tick in from her eardrum.

Herbie’s dramatic recovery was miraculous. My god-sister has the caring experience for wounded and sick animals. What is interesting is that when we first injected him, it felt like injecting a rock. The next day, he felt soft as a pillow.

As a family medicine doctor, my moral of the story is always to keep handy a stock bottle of vitamin C. You just never know when it will safe someone’s life!