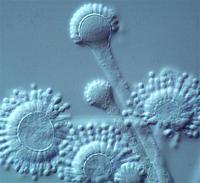 Molds (or moulds) include all species of microscopic fungi that grow in the form of multicellular filaments, called hyphae.

Mold toxins, mycotoxins, damages nerves and is related to autoimmune diseases, that is your own defense system turns against yourself, i.e. against nerve and brain tissue. Furthermore, mycotoxins is associated with allergies and respiratory system problems like sinus problems and asthma. This news item helps to put things in perspective:

Mould toxins in buildings damaged by moisture are considerably more prevalent than was previously thought, according to new international research. Erica Bloom from the Division of Medical Microbiology at Lund University in Sweden has contributed to research in this field by analyzing dust and materials samples from buildings damaged by mould. Virtually all of the samples contained toxins from mould.

“Previously it was claimed that the occurrence of mould does not necessarily mean that there are toxins present. But they are! On the contrary, we can assume that wherever there is visible mould, there are also mould toxins,” says Erica Bloom.

And toxins produced by mould are more potent than was previously thought. It has now been shown, for instance, that mould toxins (mycotoxins) not only directly kill cells but can also affect immune cells in a way that increases the risk of allergies. Even incredibly tiny amounts of these toxins can do this, as little as a few picograms (a picogram is one millionth of a millionth of a gram).

New research also shows that mould releases extremely small particles that remain suspended in the air, and can get into our lungs much more easily than the spores that have previously been focused on. This can increase exposure to mould and mycotoxins hundreds of times over compared with previous calculations. And mycotoxins have further been shown in laboratory studies to have a synergistic effect: the effect of two toxins is not merely 1 + 1 but much greater.

Using methods from analytical chemistry, Erica Bloom analyzed dust sample and samples from construction materials such as molding, drywall, and wallpaper from buildings damaged by mould. She acquired nearly all of the samples from professional damage assessors.

“We looked at 6-7 different mycotoxins and found them in a majority of the samples. And since there are at least 400 sorts of mycotoxins, what we have seen is probably just the tip of the iceberg,” she says.

Mould in buildings is a phenomenon that has been known since the times of the Old Testament. In Leviticus mention is made of spots that constitute “a fretting leprosy in the house,” and should be scraped off and thrown away “in some unclean place.”

“Actually, we haven’t made all that much progress today,” maintains Erica Bloom. “We know that people are sickened by buildings damaged by moisture, but whether this is primarily caused by mycotoxins, bacteria, or gases given off by the moist building materials, this we don’t know exactly. We should therefore observe the principle of caution and renovate the building as soon as a moisture problem or mould is found.”

After she defends her thesis on December 6, Erica Bloom will start working with indoor-environment issues at the IVL, the Swedish Environmental Research Institute. Her thesis director, Lennart Larsson, is continuing his research with the Lund team, for example participating in a major EU project on indoor environments in schools and their possible connections to asthma and allergies.

Mold is a real and underestimated problem, its implications include other hazards not discussed in this news item. For example, a study [1] revealed that 100% of 100 subjects exposed to mycotoxins had abnormal brain physiology testing including short term memory loss and concentration impairment among others, and brain scans were abnormal in 86% of those studied.

Royal Society of Chemistry (2008, May 1). One In Five Rooms Is ‘Highly Contaminated’ With Hidden Mold. ScienceDaily.