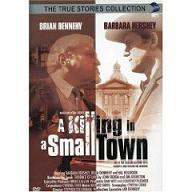 As I mentioned yesterday, the misuse of anger can be hazardous to your health, but it can also have disproportionate consequences for those people around you. An example of this last case might be Killing in Small Town which I saw recently. The movie is about a brutal ax murder where the killer strikes her victim 41 times. The murderer is a reserved woman who repressed her anger in such a way that when she got angry, she surely lost control! As I previously said, angry responses very seldom reach uncontrollable levels and when they do, they are usually because of misuse of angry feelings that have little or nothing to do with the immediate actual irritating situation, for example unconscious anger rooted in the past or in someone else. In general, the greater the awareness of how we really feel, the less chance there is to lose control. And needless to say, the murderer in this movie is so unaware of her anger, that it becomes impossible for her to have control once she explodes. In the movie (spoiler warning…) the anger was triggered by a childhood memory where she was hit in the head and also because her victim was trying to kill her in the first place!

The personality of this anger-repressed woman reminded me of what Theodore Rubin, M.D. explains in The Angry Book about cooling off our anger, whether it is due to childhood trauma, survival, or to sustain illusions of our ourselves about never getting angry:

Freezing it is the measure of success in subverting anger. It never works on anger exclusively. It always affects all our emotions, including love. It is a measure of our total success in removing ourselves from our feelings (especially anger). In removing ourselves from our feelings—that is, in submerging and deadening our feelings—we are extraordinarily destructive of ourselves. This is a form of self-imposed anesthesia (like ether or gas) that kills our spontaneity sensitivity and potential creativity. It is the great destroyer of self and human identity and human relatedness. How can we relate if we don’t feel?

Well, the movie is quite shocking and extraordinarily acted, based on a true story it sure gives us food for thought.