Toxo keeps popping up again and again on behavioral and neurological research. I talked about it awhile ago in Toxoplasmosis and Personality Changes,  but a friend brought to my attention the following paper:

The incidence of adult brain cancer was previously shown to be higher in countries where the parasite Toxoplasma gondii is common, suggesting that this brain protozoan could potentially increase the risk of tumor formation. Using countries as replicates has, however, several potential confounding factors, particularly because detection rates vary with country wealth. Using an independent dataset entirely within France, we further establish the significance of the association between T. gondii and brain cancer and find additional demographic resolution. In adult age classes 55years and older, regional mortality rates due to brain cancer correlated positively with the local seroprevalence of T. gondii. This effect was particularly strong for men. While this novel evidence of a significant statistical association between T. gondii infection and brain cancer does not demonstrate causation, these results suggest that investigations at the scale of the individual are merited.

There is still more research to be done, as it is usually said “correlation does not imply causation”. But toxoplasma gondii is turning out to be much more problematical than people will like to admit. In fact, I stumbled upon an interesting remark on the paper:

Latent T.gondii infections are traditionally considered benign by conventional medicine, but evidence is accumulating that the bradyzoite stages encysted in the brain during the latent phase are responsible for diverse neurological pathologies (see Flegr,2010 for a recent review). T.gondii is sufﬁciently common in humans that it could lead to a large proportion of brain cancer cases (Thomasetal.,2012).”

Toxoplasma gondii is the most common protozoan parasite in developed nations and up to 80% of the population may be infected, depending on eating habits and exposure to cats. After the initial acute infection, the latent and dormant form of T. gondii is found predominantly in nervous and muscle tissues in infected people. Until recently, latent infections in humans were assumed to be asymptomatic but personality profiles, behavior, and psychomotor performance tells a different story. The evidence accumulating is indeed a bit frightening. 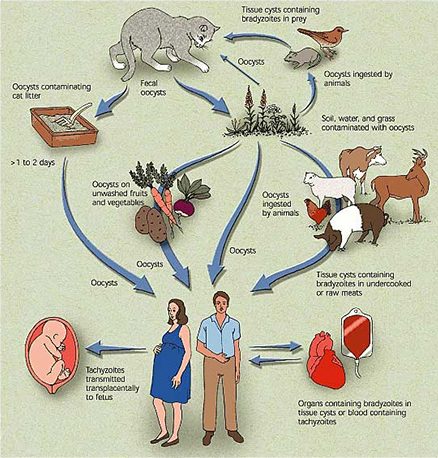 Take for instance this study:

After a short phase of acute toxoplasmosis the infection proceeds into its latent phase when cysts are formed and these survive for the rest of the host’s life, mainly in neural and muscular tissues. In immunocompetent human subjects the latent phase of infection is usually considered asymptomatic and harmless [2].
Toxoplasma is known to induce specific behavioural changes in infected rodents. Observed decreases in motor performance [3], learning capacity [4], neophobia [5], and fear [6], and increases in activity [7,8], and reaction times [9] are usually considered evolutionary adaptations of the parasite that facilitate the transmission from intermediate to definitive host (typically from rodents to cat) by predation [10]. Human latent toxoplasmosis leads to prolongation of reaction times [11] and changes in personality profiles [12,13]. These changes are probably side effects either of the rodent-aimed manipulative activity of Toxoplasma or of some pathogenic activity of the parasites in the brain. The changes cannot influence the risk of predation in modern humans; nevertheless, prolongation of reaction times could increase the risk of other incidents such as traffic accidents. If this is true then the prevalence of toxoplasmosis in participants in traffic accidents should be higher than in the general population living in the same area.

The study is a retrospective case-control study and they conclude that “subjects with latent toxoplasmosis have significantly increased risk of traffic accidents than the non-infected subjects. Because of its high prevalence and therefore extremely high attributable mortality, latent toxoplasmosis, the mildest form of T. gondii infection, might in fact represent a serious and highly underestimated economic and public health problem.”

You might be interested to hear what Robert Sapolsky, professor of biological sciences at Stanford University and of neurology at Stanford’s School of Medicine has to say on this topic:

Toxo: A Conversation with Robert Sapolsky about Toxoplasmosis

When you look at normal rats, and expose them to cat urine, cat pheromones, exactly as you would expect, they have a stress response: their stress hormone levels go up, and they activate this classical fear circuitry in the brain. Now you take Toxo-infected rats, right around the time when they start liking the smell of cat urine, you expose them to cat pheromones, and you don’t see the stress hormone release. What you see is that the fear circuit doesn’t activate normally, and instead the sexual arousal activates some. In other words, Toxo knows how to hijack the sexual reward pathway. And you get males infected with Toxo and expose them to a lot of the cat pheromones, and their testes get bigger. Somehow, this damn parasite knows how to make cat urine smell sexually arousing to rodents, and they go and check it out. Totally amazing.[…]

Some extremely nice work has been done by a group at Leeds in the UK, who are looking at the Toxo genome, and we’re picking up on this collaboratively. Okay, Toxo, it’s a protozoan parasite. Toxo and mammals had a common ancestor, and the last they did was God knows, billions of years ago. And you look in the Toxo genome, and it’s got two versions of the gene called tyrosine hydroxylase. And if you were a neuro-chemistry type, you would be leaping up in shock and excitement at this point.

Tyrosine hydroxylase is the critical enzyme for making dopamine: the neurotransmitter in the brain that’s all about reward and anticipation of reward. Cocaine works on the dopamine system, all sorts of other euphoriants do. Dopamine is about pleasure, attraction and anticipation. And the Toxo genome has the mammalian gene for making the stuff. It’s got a little tail on the gene that targets, specifies, that when this is turned into the actual enzyme, it gets secreted out of the Toxo and into neurons. This parasite doesn’t need to learn how to make neurons act as if they are pleasurably anticipatory; it takes over the brain chemistry of it all on its own.

Of course, at this point, you say well, what about other species? What does Toxo do to humans? And there’s some interesting stuff there that’s reminiscent of what’s going on in rodents. Clinical dogma is you first get a Toxo infection. If you’re pregnant, it gets into the fetal nervous system, a huge disaster. Otherwise, if you get a Toxo infection, it has phases of inflammation, but eventually it goes into this latent asymptomatic stage, which is when these cysts form in the brain. Which is, in a rat, when it stops being anything boring like asymptomatic, and when the behavior starts occurring. Interestingly, that’s when the parasite starts making this tyrosine hydroxylase.

So what about humans? A small literature is coming out now reporting neuropsychological testing on men who are Toxo-infected, showing that they get a little bit impulsive. Women less so, and this may have some parallels perhaps with this whole testosterone aspect of the story that we’re seeing. And then the truly astonishing thing: two different groups independently have reported that people who are Toxo-infected have three to four times the likelihood of being killed in car accidents involving reckless speeding. […]

What is the bottom line on this? Well, it depends; if you want to overcome some of your inhibitions, Toxo might be a very good thing to have in your system. Not surprisingly, ever since we started studying Toxo in my lab, every lab meeting we sit around speculating about which people in the lab are Toxo-infected, and that might have something to do with one’s level of recklessness. Who knows? It’s very interesting stuff, though.

You want to know something utterly terrifying? Here’s something terrifying and not surprising. Folks who know about Toxo and its affect on behavior are in the U.S. military. They’re interested in Toxo. They’re officially intrigued. And I would think they would be intrigued, studying a parasite that makes mammals perhaps do things that everything in their fiber normally tells them not to because it’s dangerous and ridiculous and stupid and don’t do it. But suddenly with this parasite on board, the mammal is a little bit more likely you go and do it. Who knows? But they are aware of Toxo. […]

Yes and there is an increased incidence of traffic accidents in Toxoplasma-infected military drivers.

Toxo: A Conversation with Robert Sapolsky about Toxoplasmosis