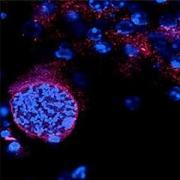 Toxoplasma gondii is a parasite that lives in the intestines of cats, shedding eggs that can be picked up by rats and other animals. Humans and other animals can be hosts to Toxoplasma as well. People get infected by its eggs by handling soil or kitty litter. It is thought that for most people the parasite lives “quietly” in their bodies including the brain, and about half of the world’s population is infected. Toxoplasmosis is only an immediate threat for people with low defenses (i.e. AIDS, pregnancy).

In general, healthy rats get anxious with the odor of cat urine and they shy away from it, making them more cautious. But scientists at Oxford discovered that Toxoplasma changes this self-preserving mechanism in rats, making them more likely to get themselves killed. The scent of a cat didn’t make them anxious or cautious. Instead, they even took a special interest in the odor and came back to it repeatedly.

The scientists speculated that Toxoplasma was capable of secreting a substance that was altering the patterns of brain activity in the rats. Given the similarity between the basic anatomy and brain chemical activity between rats and humans, the question then became if toxoplasmosis could alter human behavior as it did with our formerly cautious rats. Furthermore, a link between schizophrenia and toxoplasmosis has been made which was confirmed with recent research where it was proven that toxoplasmosis changes some of the chemical messages in the brain. These chemical changes can have an enormous effect on human behavior. The parasite infects the brain producing an enzyme called tyrosine hydroxylase, which is needed to make dopamine. Dopamine’s role in mood, sociability, attention, motivation and sleep patterns are well documented, and it also has an important role in schizophrenia:

Scientists have discovered how the toxoplasmosis parasite may trigger the development of schizophrenia and other bipolar disorders.

The team from the University of Leeds’ Faculty of Biological Sciences has shown that the parasite may play a role in the development of these disorders by affecting the production of dopamine — the chemical that relays messages in the brain controlling aspects of movement, cognition and behavior.

Toxoplasmosis, which is transmitted via cat feces (found on unwashed vegetables) and raw or undercooked infected meat, is relatively common, with 10-20% of the UK population and 22% of the US population estimated to carry the parasite as cysts. Most people with the parasite are healthy, but for those who are immune-suppressed — and particularly for pregnant women — there are significant health risks that can occasionally be fatal.

Dr Glenn McConkey, lead researcher on the project, says: “Toxoplasmosis changes some of the chemical messages in the brain, and these changes can have an enormous effect on behavior. Studies have shown there is a direct statistical link between incidences of schizophrenia and toxoplasmosis infection and our study is the first step in discovering why there is this link.”

The parasite infects the brain by forming a cyst within its cells and produces an enzyme called tyrosine hydroxylase, which is needed to make dopamine. Dopamine’s role in mood, sociability, attention, motivation and sleep patterns are well documented and schizophrenia has long been associated with dopamine, which is the target of all schizophrenia drugs on the market.

The team has recently received $250,000 (£160,000) to progress its research from the US-based Stanley Medical Research Institute, which focuses on mental health conditions and has a particular emphasis on bipolar illnesses.

Dr McConkey says: “It’s highly unlikely that we will find one definitive trigger for schizophrenia as there are many factors involved, but our studies will provide a clue to how toxoplasmosis infection – which is more common than you might think – can impact on the development of the condition in some individuals.

“In addition, the ability of the parasite to make dopamine implies a potential link with other neurological conditions such as Parkinson’s Disease, Tourette’s syndrome and attention deficit disorders, says Dr McConkey. “We’d like to extend our research to look at this possibility more closely.”

As a general rule, and without taking into consideration this new study, acute or subacute, symptomatic infections in children and adults as well as symptomatic or asymptomatic primary infections in pregnant women require treatment. Several different therapeutic schemes are recommended for this last indication. For example, spiramycin daily for four weeks from diagnosis to the end of the 15th week of pregnancy, and in the period beginning with the 16thweek of pregnancy pyrimethamine daily for four weeks together with sulfadiazine and folic acid. The recommendations also vary for treatment of toxoplasmosis in AIDS cases, e.g., pyrimethamine/sulfadiazine or pyrimethamine/clindamycin.

To prevent infections, consider that people become infected by ingestion of raw meat containing eggs. It is estimated that in Europe about 1–6% of domestic cats are egg excreters. Sheep and goats are frequently infected with toxoplasmas; and infection prevalences of pigs have decreased significantly in pig farms with high hygienic standards. Cattle are also considered carriers, although in a more rare basis. Certain wild animal species (e.g.,wild boars) are relatively frequently infected, not so horses and chickens. Dairy products are not considered sources of infection. Toxoplasma cysts remain viable and infectious in meat for up to three weeks at 4 degrees Celsius. Deep-freezing to –20 degrees kills eggs within three days, heating to 70 degrees is lethal to them within a few minutes. Toxoplasma eggs show considerable environmental resistance, but can be killed rapidly by heat (70 degrees).

Pregnant women should eat only meat that has been thoroughly heated or deep-frozen. Close contact with cats should be avoided. Cat litter boxes in the house should be cleaned out daily and flushed with boiling water wearing always rubber gloves. Cats can be fed canned (boiled) meat to protect them from infection.

The Return of the Puppet Masters