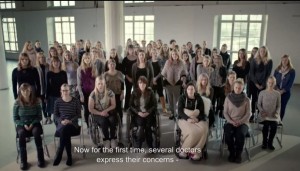 Caption from the documentary on HPV vaccines entitled, “The Vaccinated Girls – Sick and Betrayed.”

Keep in mind that VAERS only reports cases from the United States. Some of the associated diseases after the HPV shot include Postural Orthostatic Tachycardia Syndrome, Complex Regional Pain Syndrome, Multiple Sclerosis, epilepsy, Lou Gehrig’s disease and several other serious conditions.

There are two companies manufacturing the HPV vaccine: “Gardasil and Gardasil 9” by Merck & Company and “Cervarix” by GlaxoSmithKline. The following settlement regarding GlaxoSmithKline should leave no doubts about their reputation:

Despite these facts, the vaccine is still on the market and regarded as “safe” in most countries. An exception was given by Japan which withdrew its recommendation in 2013 and has not reversed that decision because of concerns from the public about adverse events. Others are taking notice as well. According to Medscape Medical News, the European Medicines Agency announced in July 2015 that it was conducting a safety review of HPV vaccines, which was requested by Denmark, where reports of adverse events after HPV vaccination have been widely reported in the media.

Denmark’s public awareness stems from this documentary which was aired on TV2, a national channel:

Have you ever wondered where it all started? Who were the first girls tested with the vaccine and what happened to them?

Some people might be familiar with Santa Cruz (Guanacaste) in Costa Rica. In fact, Costa Rica holds one of the highest density of clinical trials per population in the whole world. In other words, its population are good guinea pigs. Much of what is known about the HPV vaccine comes from there. The research began in 1985 in Guanacaste which, by then, was the country’s poorest region.

The following article published in March 2015 reveals some disturbing facts regarding the HPV vaccine tested in Costa Rica:

This article explains the difficulties innovative pharmaceutical firms have in repaying shareholders with attractive dividends. The problem is the result of the expiration of the patents of blockbuster drugs and the difficulties that the firms have in bringing new blockbuster drugs to the market. One of the solutions companies have found has been to accelerate the implementation of clinical trials in order to expedite the commercialization of new drugs. Doing so increases the period in which they can sell drugs at monopoly prices. We therefore discuss how innovative pharmaceutical firms shorten the implementation time of clinical trials in Latin America and the consequences such actions have on the quality of the collected data, the protection of human rights of the subjects of experimentation, and compliance with the ethical principles approved in international declarations.”

The authors reveal how, since 1986, three researchers with vested interests were Ministers of Health in Costa Rica, approving regulations favorable to Big Pharma while they were on office. One Health Minister was the director of the National Children’s Hospital in Costa Rica while another was the chief pediatrician of the Infectious Diseases Division at the same hospital.

The direction of the company administering the contract of the HPV vaccine clinical trial was held by high ranking Ministry officials. In other words, Big Pharma had a very good start in Costa Rica via the Ministry of Health. A very convenient situation, since the Food and Drug Administration rarely inspects the implementation of trials abroad, but approves medications and vaccines that have been experimented in many countries.

In regards to the HPV clinical trial which began in 2004 with a 20 million dollar funding, the authors report the following:

“[Not] even an internal audit of the Costa Rican Department of Social Security [in charge of most of the nation’s public health sector] could access the informed consent. A report of the Board of the College of Physicians questioned the vagueness of the consent, the contradictions in the text, omissions and declarations that might be considered misleading. There was no mention that one of the objectives was to monitor the occurrence of adverse effects, and that the effectiveness of the vaccine in women with HPV infection was studied. It implied that the vaccine would prevent HPV infection but did not mention that there was a high probability that the women were already infected or already passed the infection. Although a private local company was executing the clinical trial, in the document of the informed consent appeared the name of the Costa Rican Department of Social Security, implying to the participants that this public institution which citizens trust, was the executor. There is evidence that many women did not understand the consent. It also implied that the trial was of public interest when the major beneficiaries were private companies, in particular, the sponsor.”

A journalist interviewed a woman who was participating on the trial. When she reported adverse effects that could be considered serious, the explanation given to her by the physician was that “she had too many hormones”. She was not convinced and two months afterwards, she withdrew herself from the clinical trial without giving any explanations.

Some of the conclusions are pretty damning:

“Other behaviors from researchers loyal to Big Pharma in Latin America, following pressure to accelerate the implementation of clinical trials, which calls into question the validity of the data and which violate ethical principles and norms include: 1) the use of unsafe equipment ; 2) falsifying analytical results; 3) failure to report adverse effects; and 4) retaining subjects in the experiment, which due to their health, should not be part of an experiment.”

There is something essentially evil in a system which recommends a vaccine based on research plagued with conflict of interests, the violation of human rights and basic ethical principles approved in international declarations, and where reports of adverse effects are discouraged or shoved under the rug. Those who recommend the vaccine whether by ignorance or refusal to see this state of affairs are actively helping that system.