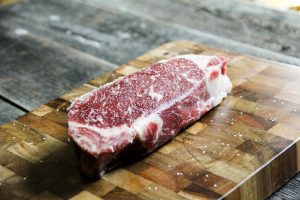 Vegetarians were celebrating last month because a study published by the American Heart Association (AHA) found that a plant-based diet was associated with reduced risk – by 42%, allegedly – of heart failure.

Vegan and freelance writer Susan Bird, in her article on this study, accidentally cited a different study (published on the same day by the AHA) about coffee, strokes, and heart failure, where researchers analyzed data from the long-running Framingham Heart Study.

In this coffee/strokes study, researchers found that drinking coffee was associated with decreased risk of developing heart failure by seven percent, and stroke by eight percent, with every additional cup of coffee consumed per week, compared with non-coffee drinkers.

They also found that eating red meat was associated with decreased risk of heart failure and stroke. And yet, the AHA recommended that people “limit red meat, which is high in saturated fat, as part of a healthy dietary pattern that should emphasize, fruit, vegetables, whole grains, low-fat dairy products, poultry and fish.”

To advocate the reduction of meat consumption based on a study which found that eating red meat was associated with decreased risk of heart failure and stroke is disingenuous, to say the least.

The coffee/strokes study specifies that they analyzed data from the long-running Framingham Heart Study – the key study which helped cement the demonization of fat.

It derives its name from a small town near Boston, Massachusetts. After 6 years of study, the Framingham researchers announced that high cholesterol was a reliable predictor for heart disease.

Medical journals, conferences and many other resources spread the news far and wide. In time, everyone knew about it and knew that its findings were impeccable.

William Kannel, the medical director of Framingham, was quoted as saying, “That blood cholesterol is somehow intimately related to coronary atherosclerosis is no longer subject to reasonable doubt.” (Teicholz, 2014, p. 65)

However, thirty years later, in the Framingham follow-up study – when more data was available – a different picture was revealed. Teicholz reports,

[It] turned out that the predictive power of total cholesterol was not nearly as strong as study leaders had originally thought. For men and women with cholesterol between 205 and 264 milligrams per deciliter (mg/dL), no relationship between these numbers and heart disease risk could be found. In fact, half of the people who had heart attacks had cholesterol levels below the “normal” level of 220 mg/dL. And for men aged forty-eight to fifty-seven, those with cholesterol in the midrange (183-222 mg/dL) had a greater risk of heart attack death than those with higher cholesterol (222-261 mg/dL). Total cholesterol turned out not to be a reliable predictor for heart disease after all.

Because the Framingham leaders had been trumpeting total cholesterol as the best possible risk factor for heart disease for so many years, they did not take great pains to publicize these weaker follow-up numbers when they came out in the late 1980s. (Soon they would be shifting the conversation over to cholesterol subfractions, known as high-density lipoprotein [HDL] and low-density lipoprotein [LDL], which could now be measured and whose predictive powers showed more promise, although even aspects of these subfractions turned out to be disappointing in the end)…

The Framingham data also failed to show that lowering one’s cholesterol over time was even remotely helpful. In the thirty-year follow-up report, the authors state, “For each 1% mg/dL drop of cholesterol there was an 11% increase in coronary and total mortality.” This is a shocking finding, the very opposite of the official line on cholesterol lowering. Yet this particular Framingham finding is never discussed in scientific reviews, even though many large trials have found similar results (Teicholz, 2014, p. 65-66).

George Mann, an associate director for the Framingham Heart Study, spent two years with a dietician collecting food-consumption data from one thousand subjects, and when he calculated the results in 1960, it was very clear that saturated fat was not related to heart disease.

Concerning the incidence of coronary heart disease and diet, the authors concluded, simply, “No relationship found.”

“That went over like a wet blanket with my superiors at NIH [National Institutes of Health],” Mann told me, “because it was contrary to what they wanted us to find.” The NIH also generally favored the diet-heart hypothesis from the early 1960s on, and “they wouldn’t allow us to publish that data,” he says. Mann’s results lay in an NIH basement for nearly a decade. (To withhold scientific information “is a form of cheating,” Mann lamented.) And even when the findings eventually came out in 1968, they were so deeply buried that a researcher has to dig through twenty-eight volumes to find the news that variations in serum cholesterol levels could not be traced back to the amount or type of fat eaten.

Not until 1992, in fact, did a Framingham study leader publicly acknowledge the study’s findings on fat. “In Framingham, Mass, the more saturated fat one ate… the lower the person’s serum cholesterol… and [they] weighed the least,” wrote William P. Castelli, one of the Framingham directors, and he published this admission not as a formal study finding but instead as an editorial in a journal not normally read by most doctors (Teicholz, 2014, p. 67).

The AHA researchers specify that their recent plant-based diet study “was observational, which means it can identify a trend or association, but cannot prove cause and effect.” I wouldn’t be surprised if their claim that it is the better lifestyle option for offsetting risk of heart failure is based on false assumptions.

Moreover, the study is based on analyzed information collected from an observational study by the National Institutes of Health (NIH). Yes, the same NIH that left George Mann’s results in their basement for nearly a decade because it contradicted their favored diet-heart hypothesis.

The AHA is infamous for its conflicts of interests. I wrote about just one of them in ‘Shame on the American Heart Association – Big Business’ Interests Take Precedence Over Human Health‘:

In an effort to support heart health and improve the wellness of rural Americans nationwide, Bayer is proud to announce its support of the American Heart Association (AHA). The effort, which runs through 2017, supports the AHA’s Healthy for Good™ movement to inspire all Americans to live healthier lives and create lasting change by taking small, simple steps today to create a difference for generations to come.

For each bag of LibertyLink® soybean seed sold for the 2017 season, Bayer will contribute 5 cents to the AHA’s Healthy for Good movement for a total maximum donation of $500,000. In addition to monetary donations to support the cause, Bayer will help raise heart health awareness across America through educational activities targeted to growers in rural communities.

Shortly after, AHA issued a new Presidential Advisory in the prestigious journal Circulation, with the following conclusions:

As it happens, soybean oil is rich in those polyunsaturated fats – which are a literal poison to your body.

Along the same line, someone else hinted at the AHA’s vegan conflict of interests: 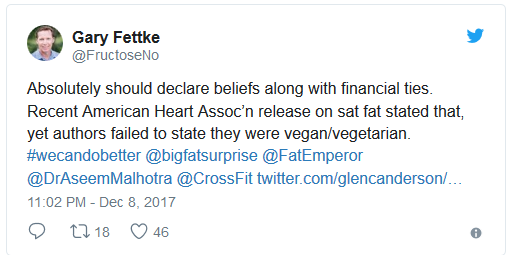 And AHA is not the only one:

When doctors make significant lifestyle changes for health improvement reasons, we tend to sit up and take notice. Well, pay attention everyone. The new leader of the American College of Cardiologists is vegan – and he thinks you should be, too.

If doctors are supposed to be role models, then perhaps this is one doctor we should be paying attention to:

American Heart Association President John Warner was away from the AHA’s Scientific Sessions with his family Monday after having a minor heart attack during the organization’s flagship scientific conference.

Warner, a practicing cardiologist and the CEO of UT Southwestern University Hospitals in Dallas, had the episode Monday morning. He was taken to a local hospital, where doctors inserted a stent to open a clogged artery.

Let’s not forget that the American Heart Association is presiding over a cardiovascular disease catastrophe, and the organization’s dietary guidelines are at least one contributing factor: