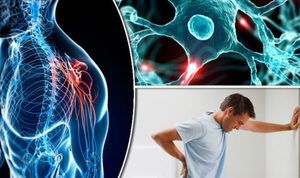 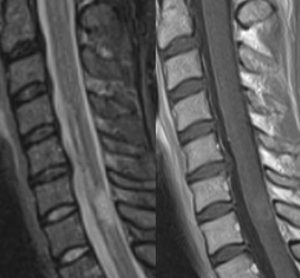 Multiple sclerosis is a demyelinating autoimmune neurodegenerative disease of the central nervous system that affects the brain and spinal cord. Autoimmune means that defenses in the body that normally protect us from infections get confused, attacking the person’s own tissues. According to Dr. Ricardo Buzó and Dr. Jorge Correale, experts in this disease, “myelin is the object of attack in multiple sclerosis, which is like the rubber coating of a cable. In this analogy the rubber is made of fat. When myelin is lost, two phenomena occur: the impulse is conducted more slowly and a short circuit occurs, because the information travels where it does not have to travel.”

One of the forms of multiple sclerosis is the relapses or remissions form, representing 70% of all cases. It can be very multifaceted with a single symptom or several of them. One of the most common is eye pain and loss of vision, usually from only one eye. The other frequent symptoms are sensory and motor ones. Sometimes balance disorders appear.

Multiple sclerosis may progress steadily or in acute attacks, followed by temporary remission of symptoms.

As a result of the attack on myelin, patients with multiple sclerosis (MS) then suffer from muscle spasticity, severe pain, muscle weakness, imbalance or loss of coordination, chills, loss of vision and difficulty falling asleep.

Through magnetic resonance imaging (MRI) of the brain and sometimes the spinal cord, multiple demyelinated patches are often visualized that are highly suggestive of MS.

MS has an incidence in Spain of one in every thousand people, affects more than 400,000 people in North America and approximately 2.5 million people around the world. In its origin, which is still being researched, genetic, hereditary and environmental factors converge. For example, MS has a higher frequency in temperate zones. It is also more common in cultures where wheat and rye are staple foods. Several paleopathologists tell us that autoimmune disorders do not seem to have harmed humans before adopting an agricultural lifestyle. Next, we will look at some reasons why agriculture seems to encourage autoimmune diseases such as MS.

Gluten (from Latin gluten, “glue”) is a composite of storage proteins termed prolamins and glutelins and stored together with starch in the endosperm (which nourishes the embryonic plant during germination) of various cereal grass grains. It is found in wheat, barley, rye, oats, related species and hybrids (such as spelt, khorasan, emmer, einkorn, triticale, kamut, etc.) and products of these such as malt. Gluten gives elasticity to dough, helping it rise and keep its shape and often gives the final product a chewy texture.

Dr. Rodrigo, expert in celiac disease and Professor Emeritus of the University of Oviedo, says that gluten alone is able to inflame and injure some areas of our brain, leading to the emergence of various neurological diseases ranging from ataxia, migraines, multiple sclerosis, polyneuritis, epilepsy, as well as Tourette’s syndrome.

According to Dr. Rodrigo, many patients with multiple sclerosis also have celiac disease or associated digestive discomfort such as recurrent abdominal pain, diarrhea or constipation, dermatitis, and anemia. In their experience, many MS patients improve with a gluten-free diet, stabilizing the disease and experiencing a progressive improvement in their symptoms. A gluten-free diet is a complementary treatment worth considering and where consistency is paramount because nowadays the treatment based on immunomodulators is not effective and has many side effects. In some cases it works very well, in others it does not. What is certain is that a gluten-free diet does not cause harm and is worth trying for a reasonable time (at least for a year). There is a lot to gain and nothing to lose.

Gluten is not only problematic in vulnerable people. According to this press release from 2016:

New research reveals that a family of proteins in wheat may be responsible for activating inflammation in chronic health conditions such as multiple sclerosis, asthma, and rheumatoid arthritis. Scientists discovered that the proteins might also contribute to the development of non-celiac gluten sensitivity.

Findings were presented at UEG Week 2016 in Vienna, Austria – a meeting organized by United European Gastroenterology for specialists to communicate the latest research in digestive and liver diseases.

Although wheat was only added to the human diet around 12,000 years ago, it has become a major dietary staple and is widely used in processed foods. One group of proteins found in wheat – amylase-trypsin inhibitors (ATIs) – has been shown to trigger an immune response in the gut that can spread to other tissues in the body.

ATIs are plant-derived proteins that inhibit enzymes of common parasites – such as mealworms and mealybugs – in wheat. ATIs also have an important role in metabolic processes that occur during seed development.

Many previous studies have focused on the impact of gluten on digestive health. However, lead researcher Prof. Detlef Schuppan, from the Johannes Gutenberg University in Germany, and team aimed to highlight the role that ATIs play in digestive health and beyond.

ATIs only make up a small amount of wheat proteins – around 4 percent – yet the immune response they induce significantly affects the lymph nodes, kidneys, spleen, and brain in some people, causing inflammation. ATIs have also been suggested to exacerbate rheumatoid arthritis, multiple sclerosis (MS), asthma, lupus, and nonalcoholic fatty liver disease, as well as inflammatory bowel disease.

“As well as contributing to the development of bowel-related inflammatory conditions, we believe that ATIs can promote inflammation of other immune-related chronic conditions outside of the bowel. The type of gut inflammation seen in non-celiac gluten sensitivity differs from that caused by celiac disease, and we do not believe that this is triggered by gluten proteins.” Prof. Detlef Schuppan

“Instead, we demonstrated that ATIs from wheat, that are also contaminating commercial gluten, activate specific types of immune cells in the gut and other tissues, thereby potentially worsening the symptoms of pre-existing inflammatory illnesses,” Prof. Schuppan adds.

Some individuals experience stomach symptoms when eating foods with ingredients containing gluten – such as wheat, barley, and rye – even if they do not have celiac disease. ATIs may contribute to this non-celiac gluten sensitivity (NCGS). This area of research is relatively new, and more research needs to be conducted to understand NCGS and who is at risk.

There are currently no biomarkers for NCGS to monitor a patient’s status, and based on current understanding, no intestinal damage has been indicated in people with NCGS after exposure to gluten. Healthcare providers, as a result, rely solely on symptom resolution to observe whether intervention improves the condition.

While gluten is not believed to cause NCGS, people with the condition have been reported to benefit from a gluten-free diet. Some of their symptoms – such as abdominal pain and irregular bowel movements, headaches, joint pain, and eczema – rapidly improve when eating foods devoid of gluten.

Prof. Schuppan notes that the team’s research could help redefine the condition to a more appropriate term: “Rather than non-celiac gluten sensitivity, which implies that gluten solitarily causes the inflammation, a more precise name for the disease should be considered.”

Researchers are currently preparing studies to investigate further the effect of ATIs on chronic health conditions. “We are hoping that this research can lead us toward being able to recommend an ATI-free diet to help treat a variety of potentially serious immunological disorders.” Prof. Schuppan concludes.

An international team of virologists coordinated from the Severo Ochoa Molecular Biology Center (CBMSO) has shown how the herpes simplex virus can infect the cells that produce myelin, the oligodendrocytes.

The herpes simplex virus is a very common human pathogen and it also acts directly against mitochondrial DNA. Fortunately, a diet restricted in foods that are rich in viral-mimicking antigens (mostly from carbohydrates) has shown to be beneficial to fight infections and protect the central nervous system from diseases.

Another virus involved in MS is Epstein Barr, the causative agent of infectious mononucleosis.

Vitamin D deficiency is another factor identified in MS, as well as aspartame toxicity, an artificial sweetener used in processed foods. This is why checking for vitamin D levels is essential in patients with MS, as well as a healthy “pre-agricultural” diet. In Western Europe, vitamin D levels are often corrected with “shock therapy”: 150,000 units of vitamin D3 twice the first month, and later once per month for a few months.

According to Dr. Wahls, who managed her MS through dietary changes, we need large amounts of B vitamins in order to make good quality myelin, in particular: vitamin B1, known as thiamin; vitamin B6, known as pyridoxine; vitamin B9, known as folate; vitamin B12, known as cobalamin. We also need Omega 3 fatty acids and iodine. If there are no nutrients for the “building blocks”, there will be deficient or erroneous body structures.

Through her research on multiple sclerosis, Dr. Wahls discovered that in addition to the commonly known symptoms, the brains of patients with MS also tend to atrophy. This piqued her curiosity and led her to investigate other diseases with similar brain problems, such as Huntington’s disease, Parkinson’s and Alzheimer’s.

A common denominator of these diseases is mitochondrial dysfunction. Mitochondria are like small “batteries” in the cells that are responsible for energy supplies. She discovered that there are three nutrients that are essential for proper mitochondrial functioning:

With the simple fact of adding these nutrients to her diet, her deterioration began to diminish. Dr. Wahls’s pre-agricultural diet consists of the following:

In November 2017, I met Juan Luis, a 34-year-old man from southern Spain with a history of multiple sclerosis. His magnetic resonance (MRI) from February 2017 revealed demyelinating lesions in the cervical spinal cord compatible with multiple sclerosis.

Juan Luis was not in favor of taking glatiramer acetate, the immunomodulatory treatment for MS. He was rather interested in the type of dietary changes he could make to improve his health.

After explaining the role of today’s industrial diet in chronic diseases and the importance of some basic supplements, Juan Luis decided to try “life without bread.”

After four months he not only lost 7 kg (15.4 pounds) and had less skin acne, but the neurologist told him that he was unable to visualize any demyelinating lesions in the MRI. That is, his MRI is now normal. In words of Juan Luis (March 2018):

“The diet has been very good for me. I never had this physical state and I feel good. The truth is that now I know how to feed my body so that it has energy.

I could say that the paresthesias have disappeared.

We are all happy with this last visit to the doctor, the results…”

Except for some headache that the neurologist thought unimportant, Juan Luis felt and looked really great. Suspecting that he was low on electrolytes, I recommended water with unrefined salt and a blood analysis with thyroid function tests, vitamin D3, PCR, ferritin, transferrin, % saturation and electrolytes. It is very important to have optimal vitamin D3 levels in neurodegenerative diseases, as it is to check thyroid function after 3-6 months on a diet like the one Juan Luis is following. The rest of the parameters is to monitor for inflammation and/or high iron deposits in the body. The latter favors the oxidation of the body.

I hope many more people like Juan Luis and Dr. Wahls can benefit from this anti-inflammatory lifestyle!